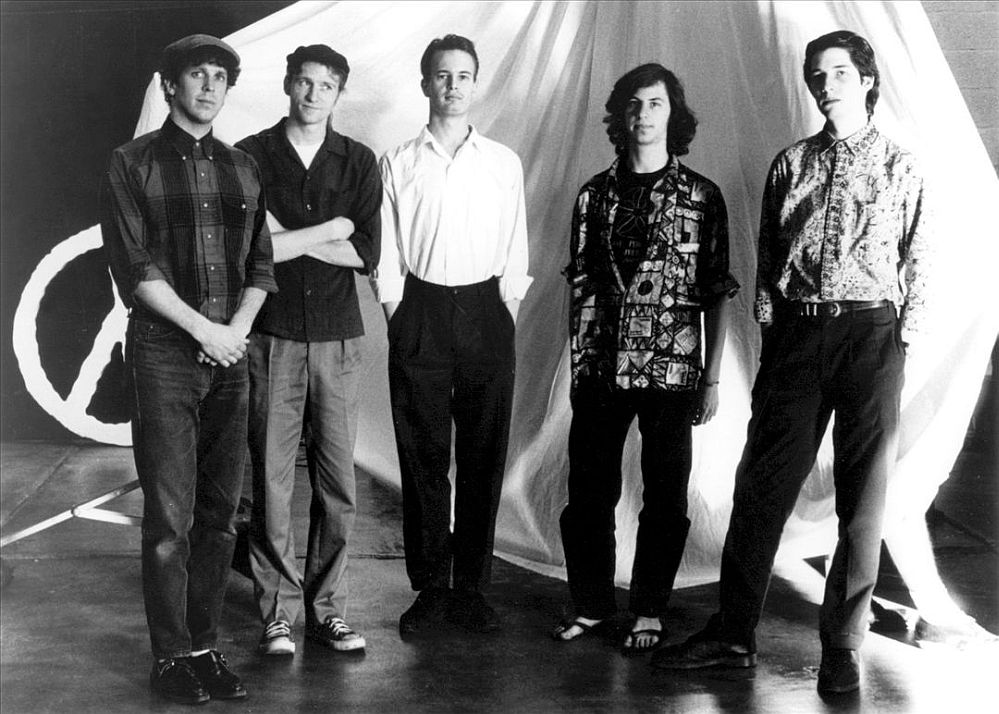 Formed in California in the early 1980s, Camper Van Beethoven consists now of Jonathan Segel, David Lowery, Chris Pedersen, Greg Lisher, Victor Krummenacher each of whom is now in a different part of the world. That didn’t keep the band from recording and releasing two albums in the last three years. Their songs are a mix of rock, ska, punk, and music from all parts of the world. Maybe not all parts but it’s diverse enough that it’s difficult to label the band in one sound. Their lyrics often use irony, pop culture and historical references, and at the same time highlighting social issues still affecting our world till this day. This music and lyrical blend makes CVB one of the most original bands to come out of the 80s.

Curious to know more about the story of Camper Van Beethoven, I had a chat with band co-founder Jonathan Segel. Jonathan plays the guitar and violin, among other things, and is currently living in Sweden. His heart however, seems still in the camper van. Have a look at what Jonathan had to say about music, films, and other things of great enduring strength and beauty.

The last album you released was El Camino Real, a Southern answer to its precedent La Costa Perdida. What is the band up to at the moment?

Jonathan Segel: These albums came out a couple years back, immediately after which Cracker (David Lowery’s other band) put out a double CD called “Berkeley to Bakersfield” and they have been touring a lot ever since. Camper has been doing small tours with Cracker, mostly in the US, and our next show is at our 12th Annual Camp-Out Festival in Pioneertown California in late August.
We intended to get together for a week before this festival to write new songs, but scheduling couldn’t work out, so we’re going to try to do it after our Christmas-New Years tour that we usually do on the West Coast of the US.

What changed between now and the 80s, say during the writing and recording of Telephone Free Landslide Victory? Do you still write and collaborate the same way between each other?

JS: Well, lots of things have changed. For one thing, we all live all over the place, David lives in Athens, Georgia, while Greg and Victor still live in California (Santa Cruz and San Francisco, respectively) and Chris Pedersen is in Sydney, Australia and I live in Stockholm, Sweden. So writing tends to happen in chunks when we get together, whenever we tour, the things we talk and joke about get woven into the text or subtext of the albums. The last two were started during a week when we had been supposed to play in Big Sur but the (outdoor) show was rained out so we stayed in my (now former) house in Oakland, CA and played music every afternoon. We started enough songs during that week to finish over the next two years.

You are able to take music from different parts of the world and put it all in one album. Can you tell us a bit more about your world music inspirations?

JS: I think any artist is a filter for what they perceive, whatever goes in is the raw material that they use to make what they make. When we like somebody’s music, usually its because they were making it to please their own ear, to make sounds that they wanted to hear. If you listen to music from all over the place, it cannot help but affect the way you want music to sound.
I guess it’s obvious that the people in the band listen to all sorts of music, but one thing that we don’t try to do is to accurately represent some other culture’s music at all—we realize that we are all television-generation American kids, and that trying to adopt some other musical culture would be idiotic, but that doesn’t mean that the influence of having heard different kinds of music can’t come through. It’s forgery, in some ways, and in some ways just allowing what we hear to influence us. We’ve all separately gone through different periods of listening to music from outside our own culture (our own culture? What is that even, anymore?) and element of it have influenced parts of songs, from the Balkan music and Indian music, to different types of African or South American music, Mexican styles, even elements of Indonesian Gamelan. The thing is that as we get older, I think the influences are more subtle, and more entwined with the cumulative influences from rock music, the genre that we live in as a band.

We are based in Beirut, Lebanon but we also like to explore music from different parts of the world. How familiar are you with music from the Middle East? Any plan to incorporate music from that region in future work?

JS: It’s sort of a tough question to answer. I think most of us are familiar with certain Middle Eastern musics, but it’s a huge subject. Everybody knows singers like Oum Kalthoum or Nusrat Fateh Ali Khan, or players like Hamza El Din, and everybody in the rock world knows about Joujouka, but outside of that we mostly are exposed to compilations of music from certain areas. Victor was listening to a lot of Selda (1970s Turkish) and that actually influenced some songs on the last album! So as for whole areas, we’re limited in our understanding to either folk music compilations or, better, the 1960s and 70s psych and rock comps which are incredible. That said, I am keenly aware that there is more to, say, Egyptian music, than just a scale, that there are tuning differences and some incredible rhythmic ideas that divide the beat in ways different than our normal rock drumming.
So as the US oil and political interests force more and more war upon the Middle East, some elements of Middle Eastern culture are leaking back and being brought into western view. For example, I have heard more heavy metal from the middle east lately, Syrian and Iraqi. I can only hope that music can make it through the bullshit and survive.

How do you decide which elements to bring into a song? For example do you come up with a song idea that is Balkan themed and proceed or does it come as part of the songwriting process?

JS: It’s usually just part of the process, it’s hard to ascribe any specific method to our madness!

Often when I hear your music, I get flashbacks of scenes from Emir Kusturica movies. Which movie would you like to have composed the film score to? Any particular filmmakers you’re fond of and would like to work with?

JS: Oh, man. I have actually done a few film scores for little indie movies, but yes, I would love it if Camper could do some scoring. I really enjoy making music for film. Who, though… That’s tough to narrow down, especially when we’re talking about scores that Camper Van Beethoven music might actually work for (I mean, I love Stanley Kubrick movies, but I doubt we would have fit, and especially not better than what he had!) We might do well for a comedic movie, but again, it would have to be pretty special.

Can you share with us a memorable moment that you experienced while touring?

JS: You know, most of the time you start out on tour thinking that you are going to have time to write or think or read, but after two days without sleep and then time rolling on, the entire world appears to be completely surreal and you are half brain-dead. You meet people, see places, eat food, experience weather, it’s all memorable but not and a way that can be verbally repeated or represented. It’s not a normal activity, not everyday life, not like being a tourist in the places you go to, you see the worst areas of any city and meet the best people there.

You’ve been in the industry for more than 30 years now. How do you see the future of music, the industry, the musicians and everything else?

Your music often has social and political references. Can you tell us a bit about your political views? Do you participate in the voting process?

JS: We are all thinking people and we all vote— though that doesn’t mean we are always politically aligned. I am very leftist, environmentalist and social democrat, very liberal (in the American usage, not economic liberal or neo-Liberal). David spends an awful lot of time working on artists’ rights (see https://thetrichordist.com ) and he fights for personal liberty quite a bit, and that can be very free-market and anti-regulatory, something I don’t see exactly eye-to-eye with him on, though of course, given the US government, actual regulation is nearly always in favor of multi-national corporations, so it’s nearly ridiculous to talk of trade regulation that would be of environmental or citizen benefit. I wholly distrust the US government, even when we have elected so-called Democratic presidents. As another example, Victor is gay, so there is an added human rights element to our overall perspective.

Can you name a few albums that shaped you as an artist/band?

JS: These have changed over the years, obviously, but here’s an odd one: The Beach Boys “Holland” album. When we got together at my old house to write the La Costa and El Camino albums, one thing we thought of and listened to was this Beach Boys album, where they expanded their territory from teh beaches of Southern California up the coast to Big Sur. We started thinking about how we had all lived all over California and what the different areas meant to us. That started the ball rolling.