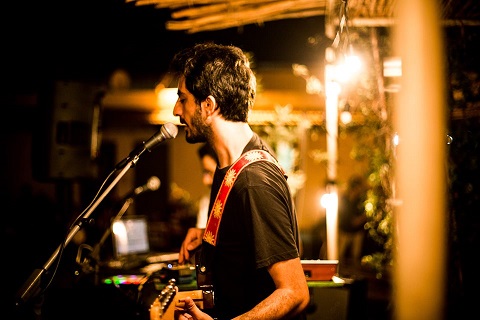 Premiere: Maragel – As The Crow Flies

Maragel is Lebanese musician Jean-Luc Maragel’s solo endeavor. He will be releasing his first EP “A Deer in the Headlights” this Friday, July 25th at AR_KA as part of an album release concert.

Prior to working on this project on his own, Jean-Luc has been in different bands since 2013.

Becoming more interested in a wider range of musical genres, namely the more obscure sub-genres of ‘90s rock that have been seeing a reemergence (e.g. shoegaze and post-punk), he decided to move along by himself to explore these different sonic avenues. After experimenting with DAW softwares, synthesizers and a new approach to playing the guitar, the foundation was being laid for what would ultimately become this first solo record.

In terms of lyrical content, Maragel looked inward for inspiration. A firm believer that writing music can act as therapy, the songs’ subject matter range from different aspects of his personal life, more specifically the transition from the innocence of high school and university life into adult life.

Blending new wave post-punk with a hint of indie and nugaze, this album conjures dreamy soundscapes and psychedelic textures that will take you on a sonic ride, only to leave you hanging in mid-air. The album was recorded at Tunefork studios in March 2019 and is produced by Fadi Tabbal.

“As The Crow Flies”, premiering today on Revolver, deals with how long-distance relationships affect us and our struggle to understand that people move on without us.

Without furder ado, here’s “As The Crow Flies” by Maragel: