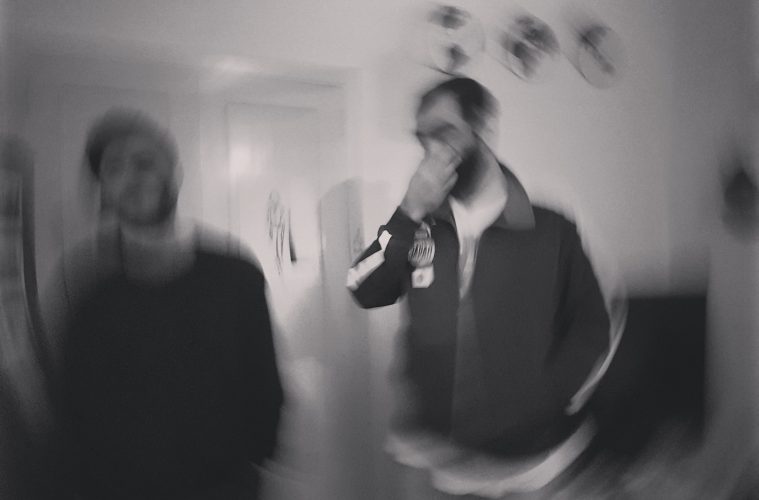 Music and Adas Bhamoud: The Story Behind Lebanese Duo Escalier301b

Following their incredible performance at Mina Image Center, I caught up with Akram Hajj and Ziad Moukarzel to talk about their new project Escalier 301b, their shared scarring childhood, their background and much more.

Picture this: it’s a hot Thursday afternoon, you spot the red LED sign when your phone vibrates announcing that they’ll be 20 minutes late – expected. You walk in and praise the universe for the wonderful invention that is the AC and you cozy up on a bench, waiting for the duo to make their entrance. Half an hour later, Akram walks in with a green apple in hand, says hi, then takes a bite of his apple. A few minutes later, Ziad comes in with a fresh new look.

The three of you sit next to each other on a bench like three ducklings. Before you even start recording, Akram opens up to you about his deepest childhood secrets and Ziad shares tips on how to get shitfaced properly.

Read through to get to know the dynamic duo and see if you’re eligible for the role of Akram’s future wife.

What the hell is Escalier 301b?

Escalier  301b is an experimental and improv project led by Ziad Moukarzel (aka Mouka) and Akram Hajj (Kinematik drummer).

Influenced by whatever MTV was playing at the time and the death of Kurt Cobain, Ziad started playing the guitar at 14 years old and later on played bass in the school band/orchestra. He used to borrow pedals from his neighbor and experiment with the bass, starstruck by the distorted sound that would come out.

He registered as a Business & Finance student but didn’t even make it past the first semester. He then changed career paths and decided to major in Audio/Visuals, which took him 7 years to finish. He started DJing in 2005 but stopped in 2006 to finish his movie. His experimentation with sounds led him to collaborate with Munma on a project called Index/Left towards the end of 2007. He then moved to Qatar for 4 years to work in TV production. He came back to Lebanon with a synthesizer and opened a recording studio in Hadath called Woodwork Studios.

That’s why you’re very likely to hear me say “Shukran Qatar” every once in a while.

As for Akram, he used to play a lot of basketball but at 16 years old, he realized that he’s not going to grow any taller so he gave up on becoming the next Michael Jordan and decided to assign the 10 hours/day he used to invest in basketball to music. His parents didn’t want him playing drums because his brother (who now has a PhD – yes, that’s a very important fact) was learning the piano. They compromised and got him a guitar. He didn’t like it and he had some money saved up so he bought a used set of drums and asked his friend for help with the basics and spent his time learning the rest himself. His teenage love for Metallica and Iron Maiden led him to bond with Anthony Sahyoun (from May Berde and Kinematik) at the video games cafe so they became friends and started jamming together, slowly building up to the birth of Kinematik with the addition of the other band members. He now works in his family’s medical equipment business. Ziad and Akram first met during the Irtijal festival in 2017 but they didn’t think of making music together until the end of June 2018. What started as a joke turned into a serious talk when Ziad got super drunk (apparently, he becomes scary serious when he’s in that state).

Hicham, the owner of Anise (a pub in Mar Mikhael), must have gotten in his head when he heard Ziad play and suggested that he adds drumbeats to spice things up. Out of all the drummers in Lebanon, Akram was the chosen one so Ziad officially asked Kinematik for Akram’s hand, making #StealingKinematikDrummers a trend.

[Fact-checking proved the last bit to be a lie]

The first time the two of them played together was at Anise’s anniversary, following 2 months of practice, only to ignore everything they had rehearsed and give a full-on improv performance. Over 200 people showed up, standing all the way to the other side of the road. That was the night they decided to make it official and turn it into an improv project.

There is an audience for what we’re doing but it’s not enough. People are scared of listening to something new – something they don’t know. The artist/band has to be credible to them in some way for them to go to their concert. If they give new projects a chance they’ll see that they’re missing out.

When asked this question, Akram and Ziad laughed and admitted that it was hard agreeing on a name.

The duo used to practice in Akram’s basement in Reifoun. Facing the house is a long set of stairs on which Akram used to jump around as a kid. He says that his dad used to shout at him and beat him up with his belt for doing that – which somehow became a recurring motif throughout my chat with them, and which encouraged Ziad to talk about his mom beating him up too.

Anyway, one time Akram was jamming with Paola Ibrahim from Pól and she pointed out that the name of the stairs, Escalier 301b, would be a good name for a music project. The idea died away until Ziad suggested the same thing a while later, explaining that it fits the whole ambiance of the project perfectly since their music is full of ups and downs.

Akram’s #1 priority right now is to find a woman who can make the best Adas Bhamoud (more on that later).

They’re always excited about playing live because they always end up making new music. They don’t really have any performances planned for the near future but they might play somewhere in July. Some of the things they have recorded, with the help of Anthony Sahyoun, might be out soon.