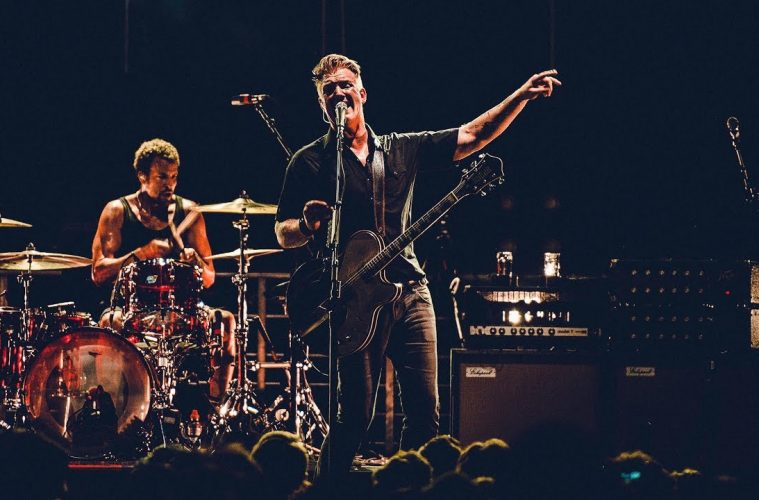 A Beginner’s Guide to Queens of the Stone Age

There are bands that I always hear about from people who share my taste in music, but due to the size of their catalogs, I get lost and I don’t know where to start, so I end up not starting at all, and then I start growing distant from my friends, to the point where they stop becoming my friends, and they stop inviting me to cool places like the three stairs in front of the Starbucks in my town where we can go smoke cigarettes together. And needless to say, that sucks. I always end up thinking “if only there were a brief but thorough guide that can help me keep my friends by listening to that band they always recommend”. Well this here is a guide to the greatest  band in the world, the Led Zeppelin of my generation, and the weirdest, most incoherent musical catalog ever written by a single group. This is a beginner’s guide to Queens of the Stone Age (QOTSA, if you don’t have enough time on your hands to pronounce the whole thing). So rejoice in the fact that you won’t be losing your QOTSA listening friends any time soon!

In this guide, I’ll try not to include the popular singles which everyone might have heard a couple of times. Instead, I’ll try to show you what I like about the band, and the thing I like the most about them is how they have evolved since their conception.

Let’s start from the end, with the last song off their last album: Villains of Circumstance

I won’t say much about this song other than it’s a song about lovers separated by distance, with my personal favorite lyric “I miss you now, what’s come over me? We’re hostages of geography”.

Done? Okay. Keep this song in mind as we go back to the very beginning, with the first song off their first, self-titled album. It’s nothing like what you just heard, but that’s the fun thing about this band.

Josh Homme, the band’s only constant member throughout their whole catalog, said that he wanted to start a band that within three seconds of listening, people knew what band it was. And this song does just that. With the main riff being a single chord repetitively down-stroked for the better portion of the song, it’s a perfect example of the “trance rock” that Homme wanted to create.

QOTSA’s albums are distinguished by a weird, unconventional production style. This album, despite being Homme’s first effort in production, is a prime example of that. The following track, You Can’t Quit Me Baby, features a drum track that is hard panned to the right, maracas and guitars hard panned to the left, and Homme’s vocals and distinctive mid-heavy guitar lead cutting straight through the middle.

Despite having a title that’s reminiscent of a Led Zeppelin track, the song is actually more of QOTSA’s answer to Radiohead’s ‘Creep’, with the song being about an actual creep who ends up becoming suicidal. It also contains the lyric “I want you to notice when I’m not around”. This begs the question, who sang it better?

But QOTSA’s lyrics are not all grim. The next song, Monsters In The Parasol, from their second album Rated R, is about having sex on LSD. Yikes. It has lyrics like “I’ve seen some things I thought I never saw covered in hair”. We’ve all been there, right?

The song is extremely dancy, and again it shows the electronic influence that makes Homme play a one note riff to better effect than many other musically elaborate phrasings from his peers. The video also features a shady puppy dealer!

Rated R is where QOTSA really became weird. They captured their sound and genre so well, and just ran with what they had to make it frighteningly weird. This next song, Leg of Lamb, is a personal favorite of mine, with an extremely hypnotizing main riff and drumline.

A highlight of the song is the sarcastic one note guitar solo used by Homme to mock the concept of guitar solos.The band’s sense of humor and silliness is also displayed here in lyrics such as “the situation is so strange, it’s a TV show. CLICK!”

The next song, I Think I Lost My Headache, is a bit on the long side, and it’s not really a favorite of mine, but it makes the list for its weirdness. Particularly for its outro’s weirdness. Listen to the hypnotizing intro riff, skip the rest of the song, and listen to that riff again in the outro (which starts halfway through the song). You need to check this out.

Their third album, Songs for the Deaf, a fan favorite, is a sort of loose concept album about the drive from Los Angeles to the Joshua Tree desert, and how the radio starts becoming weirder and darker, matching the changing scenery of your journey. It’s a great road trip album, and it kicks off with a murderous screaming song called You Think I Ain’t Worth A Dollar, But I Feel Like A Millionaire.

The great thing about QOTSA is how much of a revolving door for musicians it is. The members keep changing, each bringing his own seasoning to this rotten fruit salad, and they all even switch roles from time to time. Nick Oliveri, usually limiting himself to playing bass, screams his lungs out on this track as he assumes the lead vocals responsibility.

No One Knows is arguably QOTSA’s most famous song. I’m including it in this list to highlight a special recording technique the band uses for the drums. Dave Grohl played drums on this album, and he was told by Josh to record all the drums without any cymbals in a first take, with the second take being dedicated solely for the recording of the kit’s high end. You can really hear it in how tight and dry every drum beat sounds in this song, giving it its punchy edge.

In addition to having an ever-changing line-up of musicians, QOTSA is also notorious for its wide array of guest musicians who appear on their albums. Burn the Witch features none other than ZZ Top’s Billy Gibbons. Billy plays a fantastic solo that features the world’s first ever beard harmonic (no kidding!) Can you spot it? The song is off their fourth album, Lullabies To Paralyze, and it’s one of the many songs on there that features themes of witchcraft and other stuff that make the hair on the back of your neck stand. The album was written at a period where Josh was reading a lot of Grimms’ Fairy Tales, and the result was one of the most played albums around Halloween. So if you’re a fan of locking up your kid brother in a dark room to creep the sanity out of him, this album is for you!

Make It Wit Chu is also one of their more popular songs, but it makes the list because it shows off their bluesier, more sentimental side, if you consider telling a lady that you would like to make sweet sweet love to her anytime anywhere again and again sentimental, that is. It also features the most stupid and awesome lyric of all time: “sometimes the same is different, but mostly, it’s the same”.

We’re back with the one note riffs, this time with Sick Sick Sick off their weirdest album by far, Era Vulgaris. The album was recorded in a hurry to avoid having the label execs control what the band was doing in the studio. The result is a high budget raw album with bizarre sounds that no record label would ever sign off on. The video features a cannibalistic woman who enslaves the band and eats them one by one. The song also features a brief appearance by none other than The Strokes’s Julian Casablancas singing “I’m gonna change, I don’t wanna change”.

Did you ever wish you had a theme song playing whenever you walk down the street? Smooth Sailing sounds like it was written for that sole purpose. It even features the line “got my own theme music plays wherever I are”. Grammar aside, this song is flawless. The groovy beat and optimistic lyrics are great for when you wanna walk up to your boss and tell them you quit,as you excrete all over their office floor.

Towards the end of the band’s penultimate album …Like Clockwork, Smooth Sailing fades out into the bleakness of I Appear Missing, the same bleakness you feel after you get arrested for excreting on your boss’s office floor. The song is more indicative of the album’s mood, with Smooth Sailing being the outlier. The album was written in a period where Homme was severely depressed after having passed away momentarily on the operating table after a surgery on his knee went wrong. At least that’s the story he tells. The song kicks off with “Calling all comas, prisoner on the loose”, and ends with an incredible jam that gives me goosebumps every single time.

So where does a band go after a song like that? Why they team up with the guy who made great records with Adele, Lady Gaga, Bruno Mars, and Amy Winehouse, of course! Here’s The Way You Used To Do, from their last album Villains, produced by Mark Ronson.

The video features Homme dancing to his band’s usually mid-rangy guitars belting out riffs against a big band-ish rhythm section inspired by Cab Calloway and Dean Martin. The song was jarring to most fans. We went from Regular John to this?! But that was exactly the reaction Homme was looking for. Homme likes to shock and surprise by evolving his sound and always pushing it forward, always giving you the unexpected. Homme famously said that if you’re not hated by at least 50% of the listeners, you’re doing something wrong. In the months leading up to the album’s release, he said he was looking to weed out all the misogyny, homophobia, and machoism from his fanbase, and that the people who would hate this album are exactly the people he doesn’t want as fans anymore.

This is what makes QOTSA the greatest band in the world, in my opinion. Not one of their albums sounds like the other, and fans can’t seem to agree on which one is their best.

Follow this playlist if you prefer a Spotify experience: