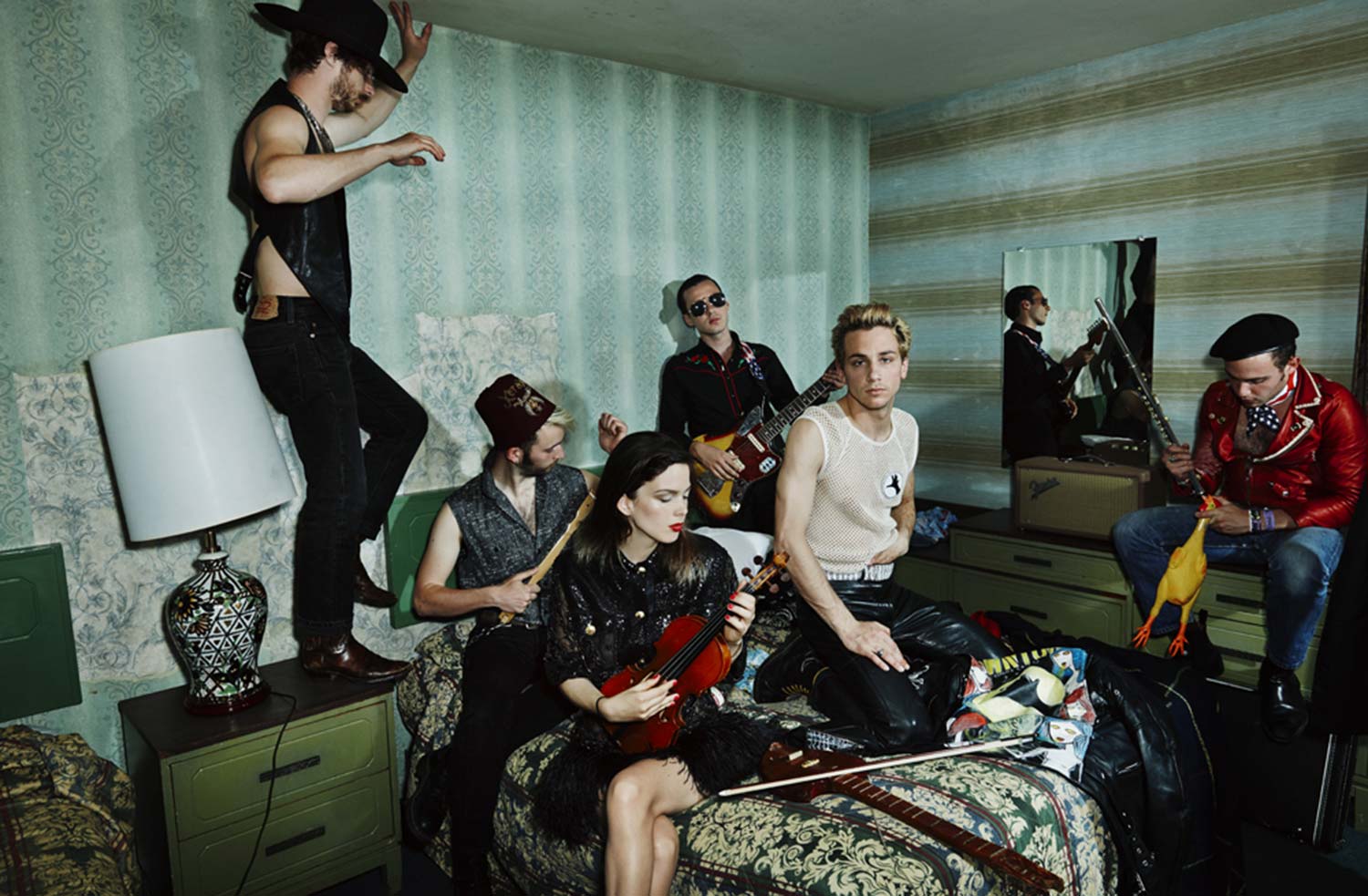 If Quentin Tarentino were to be in a band, it would most definitely be La Femme. La Femme is undeniably one of the most distinctive French bands right now, with a voodoo ability of making you surf to their hypnotic synths and guitar riffs all day. Every song tells a different story and yet they all sound like they belong to one exciting rollercoaster. The band is essentially inspired by Punk, New Wave and French Yé-yé from the 60s, and was able to combine all those genres to create their inimitable identity. We got the chance to interview members of the band to get a glimpse of what happens behind the scenes.

By Tiffany Murr and Bernard Batrouni

If the band could embody one famous woman which one would you choose to be?

If the band could embody one famous woman it will be complicated because we want to personify the accomplished woman with spirit, appearance and determination. The ideal woman would be a mix between Valentina Terechkova (first female cosmonaut), Georges Sand (XIXth century writer) and Marlene Dietricht.  You need all colors to create a masterpiece.

The name and the artwork of your album – Psycho Tropical Berlin – are as mysterious as your band’s name. The imagery on the cover seems taken from an Atlantis-like city. Can you tell us more on the theme behind the title and the cover?

The title of the album is literally what the cover is embodying: A mix between a psychedelic mysterious woman with no look, and an environment full of abandoned buildings and invaded by tropical vegetation. It’s like a new age, right after the apocalypse (Berlin at the end of the 40’s), and a new kind of civilization with a style that’s reminiscent of the ancient times.

What’s the story behind the bewitching lyrics and music of La Femme Ressort?

The song begins with a guitar that sounds like a spring (and in French spring is translated into “ressort”). In addition, the parallel between a woman and a spring is fun and poetic. Sometimes, something really simple can be a big source of inspiration.

Your song It’s Time To Wake Up (2023) feels like you’ve taken us on a trip in a spaceship and left us stranded on an alien island. Can you tell us more about what you imagine the world being like in 2023?

There’s a chance that in 2023, after a nuclear war, the earth will be just like that. I definitely hope not though because this is a dystopian vision of the future, borrowed from Mad Max or Waterworld. It is a land that is rotten by something that we can’t really, survived only by a few human beings. They’re the last creatures of God, and they signify the return of adam and eve in a new earth-like paradise, except that this time it will be more trashy. No one knows what the future holds…

Which old movie would you like to have composed the film score to? Any particular filmmakers you’re fond of and would like to work with?

The first one that comes to mind is definitely Quentin Tarantino’s “From Dusk Till Dawn”. For a while now, we’ve been wanting to write a song for a Tarantino movie. In fact, a few years ago we tried to give a CD to his masseuse but we still never heard back ah ah. We’d also love to write music for some Alex De La Iglesia movie (he’s a famous movie maker who makes crazy films with terrific atmospheres like in “Las Brujas De Zugarramurdi”) and of course for Akira Kurosawa or Chris Marker.

How do you measure your success? Many fans express their love to your music, what’s the best compliment you ever got?

With the success we’ve achieved so far, we are still normal byzaroide kids of our age, like we said in french “we don’t have the melon”. The best compliment we ever got happened just a short time ago: Sacha and Marlon arrived in Los Angeles in a car, turned its door handle, opened the door and suddenly, an Italian guy exclaims “j’adore!!!” for no absolute reason. That was probably the best and most honest compliment ever.

Your music combines different elements from different cultures but somehow it all goes smoothly together. Where do you borrow these different vibes from and how do you make them work together?

It’s somehow like a puzzle with the exception that you can choose which pieces to include. We can only explain metaphorically, so let’s imagine the following: You want to make a super diner for your lover, so you decide to make “boeuf bourguignon” (very good choice mister, wonderful!). So you wake up in the morning, you make your bed and you go to the market (very important!), you buy a good piece of meat (ask for a good recommendation from your butcher) and a variety of vegetables. You fry the onions and garlic, then the meat (alone) and you put inside one bottle of red wine. Important : if you can combine with laurel and provence herbs it will be tastier. By the time you’re done eating, your lover loves it, so you end the night in their arms.. what a tender night! And all this because you matched the right elements with the good moment. You can practice this method in any discipline: music, illustration, movie, cocktail, fire chicken and sex.

In a parallel universe, how would you respond to the request of Uber to use your song Antitaxi as their official anthem?

You teased us on Facebook saying that the album is almost done. Can you give us a glimpse on what’s happening behind the scenes?

If you had to make a mix tape that would describe your musical influences, what tracks would you include?