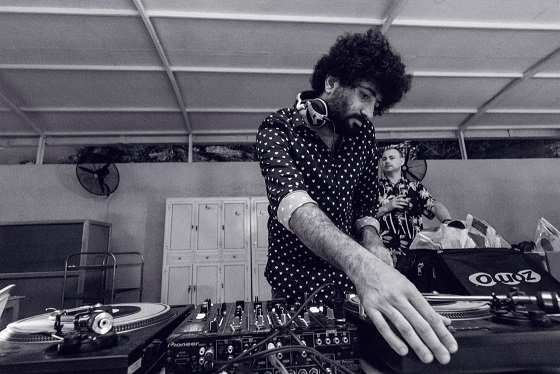 Digging in the Crates: The Ernesto Chahoud Interview

Ernesto Chahoud is one of the most passionate and dedicated record collectors in Lebanon. He took this love to the dancefloor by co-founding the Beirut Groove Collective (BGC), a weekly strictly-vinyl all-nighter that now takes place every Friday at KED. He is also the owner of Darsko, one of the record shops featured on our Guide to Lebanon’s Record Stores, and the host of the monthly “Beirut Daze” radio show on NTS.

On a hot summer day, we met up with him at The Malt Gallery, with the colorful bottles of booze serving as the perfect background for our little chat. Flowy patterned shirt on (like always) and a glass of whiskey (neat, no rocks) in hand, he answered our questions about how it all started, his unique and super rare music taste, performing at the Shubbak Festival in London, and much more. He also revealed the secret ingredients to the perfect party, Ernesto style. Read all the juicy details below. How did your love for record digging first start?

It started when I was 13 years old, actually. I was very much interested in music basically ‘60s, ‘70s,  and it was a time when everyone was throwing away records and buying CDs. Vinyls were the cheapest format for me and I was very much into it so naturally, it became a passion.

… How did it evolve into a career?

My first paid gig was when I was 16 and I’ve been doing this ever since. I have a degree and masters in philosophy but never really worked in it – I don’t like the restrictions. So yeah, my love for records became a career with me having my own record shop, compiling for BBE, DJing, doing my radio show, organizing the BGC events and all that.

Speaking of which, you co-founded the Beirut Groove Collective in 2009 alongside Rami O. How did it all start? What’s your favorite BGC memory?

Back then in Beirut, I was DJing everyday, doing shitty bar gigs. I only played at one club where they gave me a Monday night because my music wasn’t mainstream clubbing music you’d play on the weekends. Then I decided to start my own thing, along with Rami O, that would allow me to play my music on the weekend and there was no home for our music – we had to go for alternative/non-orthodox places. That’s how it all started.

I mean it’s a crazy party every week, I never thought it was gonna be 10 years this year. There’s no routine, you know? I have many many memories. One time people couldn’t find the location of the party. One time we had the BGC party at an amusement park in Hummana, another time at the beach. Each time was unique but I love the way we do it now at KED on the roof. I’m never going to have only one good memory. Can you tell us a bit about your show “Beirut Daze” on NTS?

When NTS first opened, my friend Neil Andrew – he’s a DJ – had a show there and he asked me to send him a mix from here. I sent him an all-arabic mix. Then everytime I was in London he asked me to do the show with him and it was still a very tiny radio. A couple of years later, Fergus McDonald asked me to start my own show. This is the second year of me doing it on a monthly basis – before that I was just guesting. Great community radio. I like it because the people who run it are really nice and open-minded. I really look forward to doing this radio show every time, because I feel like I need to find records that haven’t been played on the radio before and they’re loving it! They don’t care what I play, they let me play whatever I want and it’s very nice; it’s getting a lot of attention at the moment I guess. I think it’s one of the very few shows that have such a diversity – from African to Arabic to contemporary, to Jazz…

Cool! So how do you prepare for it?

As I told you, I usually look for records that are underplayed or have never been played. Some of the records I’ve picked were played for the first time ever on the radio. So in a way, every time you listen to the show you discover new records.

Darsko, your record shop, was featured on many platforms worldwide (including our Guide to Lebanon’s Record Stores), with one describing it as an appointment-only shop. What’s one fact about the shop that nobody knows?

Not open all the time. People also rarely know that it was my grandfather’s shoe factory, I spent years working on it to turn it into a record shop. I built it all by myself; it took me 4 years to finish it. I did everything from the painting to the tiles.

Do you have regular customers?

It’s not a classic record store. Mainly, I have a lot of customers coming from abroad. But in Lebanon, not everybody buys records – hardly any do actually. If you were given 10K to spend on records anywhere in the world, which city would you choose?

I don’t know… That’s a very complicated question. I have a long list but I think I’d go to Ethiopia again and spend all that money on records there.

Hmm… There are many but if I had to pick just one, right now, it would be Rainbow Bridge that was a pre Ferkat Al Ard band by Issam Hajj Ali and Toufic Farroukh. I actually had this record for years and I couldn’t find it until a friend of mine knew from Issam that it was his first every record… Issam didn’t hear it for years. I had to record it for him.

Do you have a favorite single/album? Something you never got tired of listening to for years and decades?

I guess it’s Muluken Mellesse’s album with Mulatu Astatke featured on it. I can never get bored of listening to it. It’s a Friday night and there’s no BGC party. Where can we find you? Do you have a favorite hangout spot?

If there’s no BGC on a Friday, it means that I, Nathalie Shooter and Jackson Allers are all out of the country. If we’re here, there’s definitely a party.

I don’t really have a favorite hangout spot but during the day, I hang out in cafes. I like tota and Internazionale. These are my favorite places in Beirut.

You’re playing in London on the 5th of July as part of the Shubbak Festival. How did that happen?

I really don’t know. I think I was in London DJing and recording my second compilation when I received a phone call from MARSM and they said that they were interested in working with me.

I honestly don’t like being categorized into a category such an Arabic  artist who’s playing Arabic music because it’s accurate and it is restricting, however I do understand the trend of Arabic and Lebanese music today. There are a lot of people who have been riding this wave. I never jumped on that bandwagon. It’s always been serious for me. And those who stereotypes artists this way, their approach has a bit of Orientalism.

I like the fact that Shubbak Festival isn’t trying to do that – it’s authentic.

I’m very happy to be doing this because I’m playing on the same day as Cosmic Analog Ensemble. We are very good friends for a longtime now. We go way back. We’ve worked together, exchanged knowledge, and he even wrote a song for me. He’s an incredible musician and he’s super forward-thinking. He has also played at BGC with his other band Twin Towers.

…what do you have planned?

I think I’m gonna play an all-Arabic music set. It’s only one hour and a half and it’s part of an Arabic festival so yeah, mostly great underplayed records from the Arab world. What are the 3 secret ingredients to a killer party, Ernesto style?

You made an Ethopian compilation. How did it come together?

I was just coming from Ethiopia with my finds, and we were hosting Keb Darge at our clubnight and he said “oh you should put this on a comp”. He then called Pete from BEE and they suggested that we put together a compilation and we did. The first release was so successful that it was sold out in 4 days. Now we’re doing a third pressing. I’m working on a volume 2 now with J.J. Whitefield.

What do you think about westerners reissuing middle eastern music? For example just recently we saw the release of old Ziad Rahbani songs by Wewantsounds.

Did they? I think they released Fairuz’s “Kifak Inta” and Abu Ali. To be honest, I had never heard of them before but when I asked around, turns out they’re doing it pretty legit so it’s good, no problem as long as it’s legal. It’s good for Arabic music, actually. I’ve been playing Abu Ali, for example, ever since I was 16. But it’s good that you’re seeing these things resurface. Abu Ali’s single was intended to be for international audiences but it failed miserably at the time for several reasons and now it’s seeing a lot of success so it’s good that it’s getting some appreciation. Westerners, not westerners, it doesn’t matter as long as it’s done the right way. I didn’t see any cultural appropriation. I mean the record used to be sold for a $1000 and now the reissue is being sold for $50 so more DJs can afford buying and playing it. It’s better than ripping it off from YouTube.