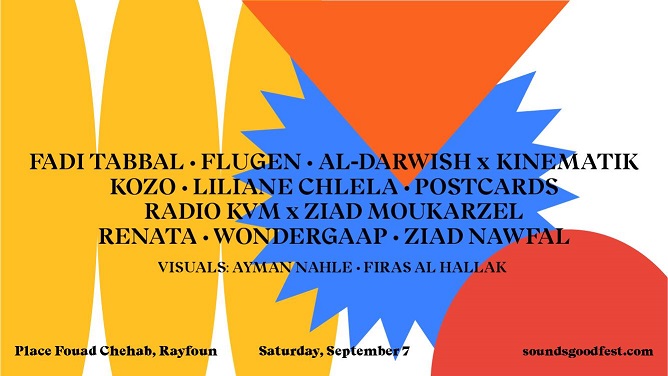 Using shapes and forms in a limited palette of colors, teasers of a new art and music festival started popping up everywhere towards mid-summer. The second step was a very The Blair Witch Project video of the location, introducing the local star-studded lineup. SoundsGood? Read through for more juicy information.

No, SoundsGood is not just another music festival because it’s more of an event that bridges the world of art with that of music with the help of mother nature. In other words, it’s a cool festival outside of Beirut that’s worth checking out. Plus, the SoundsGood team is working hard on making it a zero-waste event so try to keep that in mind before throwing your cigarette butts on the floor.

Excited yet? Here’s everything you need to know:

Fadi Tabbal is a musician, producer and sound engineer. He is the founder of Tunefork Studios. He’s the tiny guy you see at many local concerts/events, making sure the acoustics of it all are on point. Get to know him in this interview. Check out what he sounds like here.

Flugen is Maya Aghniadis’ Electro World project, inspired nu ethnic and oriental melodies. She’s one of the two semi-finalists for this year’s BBX. Check out what she sounds like here.

Hani al-Sawah aka Al-Darwish is a novelist/writer and rapper. He works as an audio engineer in film, television and music production. Check out what he sounds like here.

Kinematik is a Post-Rock apocalypse of a band that consists of Anthony Sahyoun, Rudy Ghafari, Roy Khazen and Akram Hajj (who’s also one of the SoundsGood organizers). Get to know them in this interview. Check out what they sound like here.

You know you want to hear how that weird yet intriguing collaboration is going to sound.

KŌZŌ is a Post-Rock/Math-Rock band that consists of  Charbel Abou Chakra, Elie Khoury, Camille Cabbabé, Georgy Flouty, and Andrew Georges. They will be releasing their debut album Tokyo Metabolist Syndrome at SoundsGood. Check out what they sound like here.

Liliane Chlela is known as the local queen of hairspray, Electronic music and everything in between. She was a headlining act in Boiler Room Beirut 2018 & 2019. Get to know her in this interview. Check out what she sounds like here.

Postcards is a Dream Pop/Indie Rock band that consists of Julia Sabra, Marwan Tohme, Rany Bechara and Pascal Semerdjian. They’ve been touring Europe regularly since 2014. Get to know them in this interview. Check out what they sound like here.

RadioKVM aka Sary Moussa is a music producer who has released remixed and original compositions for various labels, theaters, dance performances and soundtracks for short movies. He was one of the headlining acts for Boiler Room Beirut 2018. Check out what he sounds like here.

Ziad Moukarzel aka Mouka aka Moques aka someone who loves monikers is a live Electronic artist, DJ and producer. He is the sound and mastering engineer at Woodwork sound studio. Check out what he sounds like here.

You know you want to hear what that double electronic feature sounds like.

Renata is a Techno, Experimental, EBM DJ who returned from a music-filled journey in the UK in 2016 and joined Frequent Defect with whom she shares similar interests in addressing the socio-political issues and tabooed subject matters through multidisciplinary art. Check out what she sounds like here.

Wondergaap is an Indie Pop band that consists of Michel Maouad, Rayan Sayegh, Kevin Jamouss and Ryan Fayad. Their music is inspired by everyday life experiences. Get to know them in this interview. Check out what they sound like here.

Ziad Nawfal is a DJ, radio host, music promoter and producer. He co-founded the independent music label ‘Ruptured’ with Fadi Tabbal in 2008. He is the managing director of Irtijal since 2010. Listen to his story here.

Ayman Nahle is a filmmaker, cinematographer, and video artist who translates audio signals into visual images, inspired by electronic and experimental music. You might have seen his name on the pink posters with the astronauts in white for the Beirut Drone festival that took place earlier this summer. He’s been providing colorful, shapes-filled visuals for many local acts and will be doing the same at SoundsGood. Get to know him here.

Firas El Hallak is a video artist and filmmaker who will be taking you on a film-like journey of deconstructing and collapsing frequencies at SoundsGood festival. He’s the second astronaut who helped bring to life the music of artists at Beirut Drone festival. The last venue he invaded with his eccentric visuals was KED during TEDTEDTED’s debut concert, in collaboration with Beirut & Beyond. He really likes your approach to things so get to know him and get on his Close Friends list here

“Most people leave things till the last minute. But you’re not most people are you?” – SoundsGood team

Limited pre-sale tickets are now on sale and they’re socially-awkward (or alcoholic) friendly cause they come with drinks.

You know what you gotta do. Grab ’em here before it’s too late!

You might wanna keep an eye out on our page this week.