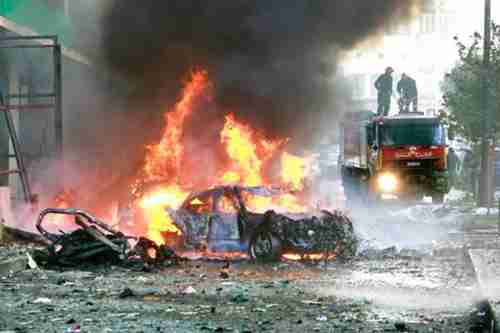 
We’ve had a rough year, in Lebanon that is. But there was light and harmony at the end of the tunnel. 2013 – so far- saw many new talents that gave us hope, a hope that was shattered every time Haifa released a new track. (..and of course, the body count which is not our field of expertise)

Today is the celebration of independence: 70 years of war and peace, guns and flowers, and a little bit of sunshine. We celebrate this day by giving a salute to 10 Lebanese acts who sprayed some rock, roll and love on 2013’s wall.

They took us back a few decades and allowed a younger generation to know what a true rock band looks like. Second decade of the 21st century and we highly doubt that you could get more rock and roll than a topless bearded singer and a blues brother guitarist.

He left us to spend a – most probably – much more exciting time in the German capital, depending on your definition of exciting. This solo artist proved that Lebanon can give birth to a great songwriting talent and emotionally energetic performances. Plus, we love his boots, ok?

Take your typical jazz trio band, inject them with groove serum, replace the piano with robots and a witch lady, and crank it up. Et voila! You have the most revolutionary raw sound blasting. You wouldn’t know what it really is, it just is. Drum and Bass might be the genre, but alien is the species. Definitely,  the most original act you’ll hear this year.

We just love atrocious singers. That’s all there is to it. Lou Reed loved pissing audiences off with insanely weird performances and the same goes for this very competent Lebanese band. A group of musical geniuses, the Incompetents are leading pioneers in this growing local scene.

One of our favorite local acts that formed this year, they’re the hottest folk act in town. They had their first breakthrough by opening to the Royal Concept in Beirut. One girl, three guys, this foursome’s music is what you want playing in the background while watching the sunset over the Mediterranean.  Folkin’ awesome.

Loopstache brought the cool back to stache long before staches got cool again. A songwriting duo that experiments with staches and instruments, they’ve been constantly entertaining us with their genius cover songs, and their stached videos. Staches. One more time, Staches!

Who Killed Bruce Lee can rock harder than they can name a band is all we can say about this band. Rocking the scene for years now, they have been giving our people some of the best live performances a Lebanese audience could hope for.

Any list on Lebanon’s music scene wouldn’t be complete without the best reggae act in town. Jamming the scene for a few years now, this band can turn a rocky beach in Batroun, into a trippy Jamaican journey.

Montreal based Wake Island has two Lebanese members and that was enough for us to put them on this list. They included Beirut on their latest tour and this country definitely embraced them Quebecois! They rocked the city and gave us one of the best performances of this summer.

The Sea-ders weren’t exactly the product of 2013, but they witnessed a revival earlier in the summer. (Thanks to us! And here’s to us sounding like douchebags). We don’t wanna talk more about them, you can just read this article if you still haven’t. We promise at least a “Impressive!” reaction from you.

A lot of the achievements this year wouldn’t have happened if it wasn’t for some passionate people in the industry who contributed to that hope that we talked about earlier. These guys have organized the best events of last year and will continue to do so hopefully this year. Beirut Jams Session, Beirut Open Stage and Wicker Park: Thank you guys for these great moments and we hope to see more next year!