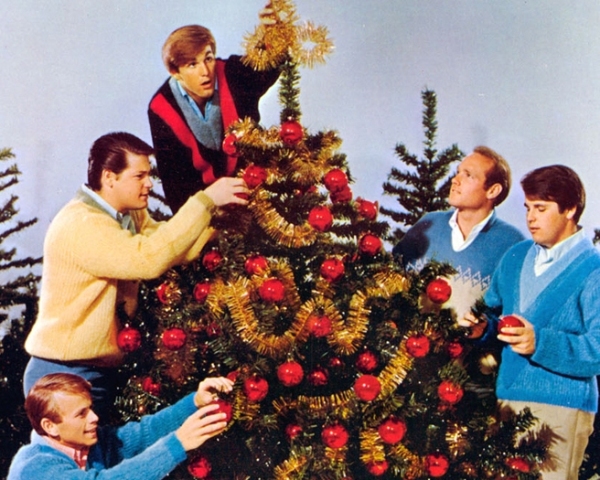 All sorts of musicians and bands have released Christmas songs and even albums, from The Beatles to the Fall. I originally planned to gather the saddest Christmas songs for this list. Fight off the Christmas cheer! “Please Daddy Don’t Get Drunk This Christmas”, “Christmas Card From A Hooker in Minneapolis”, that kind of stuff. But that goddamn Christmas cheer is contagious. I’m kind of falling for it. I’m keeping it slightly cheery but, mostly and foremostly, good and goofy.

1. The Flaming Lips – Christmas At The Zoo

Perennial kids the Flaming Lips were naturally drawn to Christmas and would go on to make a sci-fi film called Christmas On Mars. In this cut from 1995’s Clouds Taste Metallic, they go to free animals locked up in the zoo. Guess how it ends.

The Kinks bring the gritty realism of songs like Dead End Street to the holiday with this 1977 single: a department store Santa is beaten up by a gang of poor kids. It was the 70s?

If Stephen Merrit was going to write a Christmas tune, you sort of knew it was going to be telling mistletoe to go away. Dreadful decorations would deck the air, and the song would be laced with noise because it’s on a record called Distortion (2008).

Big Star’s Third (1978) is a brilliant mess of a record, with shambling broken songs portraying a man at the brink of a nervous breakdown. The two main modes are spiteful and depressed. And then there’s “Jesus Christ”, an oddly straightforward hymn, albeit sung with the hint of a grin. Is it sarcastic or sincere? Probably a bit of both.

Jan Terri became famous for the “worst music video ever”  (her 1993 song “Losing You”) on YouTube. Yes her videos are awful and Terri sings like she stumbled onto the set and decided to give it a go, but her tunes are actually catchy. Case in point: Rock N Roll Santa. I thought I’d spare you Excuse My Christmas.

6. Okkervil River – Listening to Otis Redding at Home During Christmas

On their 2002 debut, Okkervil River bring out the sad on this song about going home for Christmas, listening to Otis Redding’s I’ve Got Dreams To Remember and pining for young love lost.

Cosmic jazz crusader Sun Ra wrote this ditty for the male vocal group the Qualities. They recorded it at home and released it on 1960, along with a b-side called Happy New Year To You. Sun Ra. Christmas. Woodblocks. It’s great.

Indie rock/slowcore/dream pop heroes Low released a great Christmas EP in 1999, simply titled Christmas. Half standards, half originals, the record kicks off with Just Like Christmas. Like most every other Low song, it’s sad and it’s beautiful.

The Beach Boys released this Christmas single in 1963 and followed it up with a full Christmas album. In this song they adapt their usual hot-rod songs to Santa’s sleigh. Of course Mike Love later had to ruin things and was awarded co-writing credit after a 1992 lawsuit.

The legendary German band krautrockized the old German standard in 1976. It seems even avant-guardists give in to Christmas cheese. Can gave Stille Nacht a motorik beat and music box synths and called it their own.

Sufjan had to make this list, with 10 volumes of Christmas songs released between 2001 and 2011. Christmas Unicorn closes the collection on a high note, a 12+ minute song about these “horses with a fantasy twist” that borrows lyrics from Joy Division and ends in a electronic rave-up that is as ridiculous as it is affecting. It’s alright, I love you Sufjan.