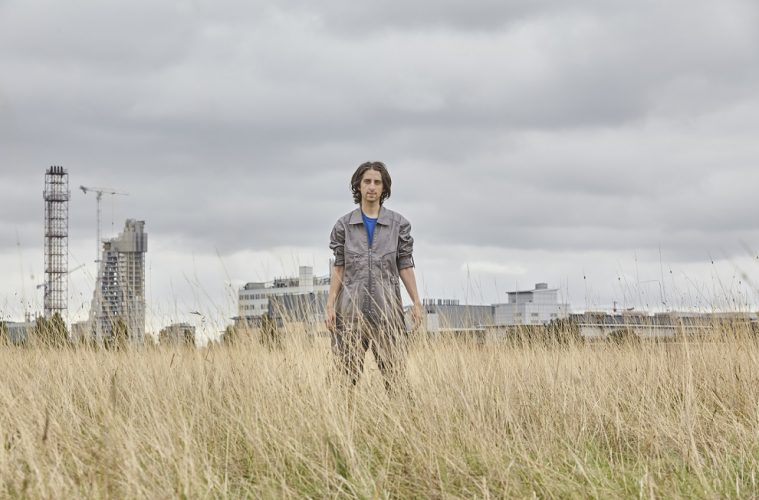 Pass Through the Fire: The James Holden Interview

British electronic producer and DJ James Holden started his career as a trance music producer, but in recent years his career saw a turn towards what some people would call “World Music”: most notable his collaboration with Maalem Mahmoud Guinia. Holden followed it with his Animal Spirits project, releasing a “folk-trance” record in late 2017.

The best way I could describe my first time listening to the James Holden and the Animal Spirits eponymous album is probably: shock, followed by acceptance, and ending with enlightenment. Watching the band perform it live felt like an instant glimpse into the future.

Read below as James Holden tells us about his collaboration with Maalem Mahmoud Guinia’s son Houssam, his latest documentary film scoring, how he sees the future of music, and more.

Stay tuned for the mixtape Holden curated for us as well, which we’ll be featuring in the coming weeks!

You’ve been on tour with the Animal Spirits for almost a year now, supporting the eponymous album. How has the experience been so far? Do you miss the studio?

It’s been wonderful, really the best year of touring of my life! I feel very lucky to tour with such a great group of friends playing such varied shows – all sorts of different environments and contexts and audiences. The music is coming out in all sorts of different ways as a result. I’ve loved watching the songs evolve as everyone improvises around them. In a way that makes up for not being in the studio so much, but I’ve had time in between shows for a few collaborations and a lot of research and half-ideas.

You have released 3 tracks in collaboration with Maalem Houssam Guinia. Can you tell us the story behind that project? Will we see more releases?

I went to Morocco and recorded an EP with Houssam’s father, Maalem Mahmoud Guinia, in 2013. I met Houssam and his brother Hamza then, as they were playing percussion and singing in his band. Sadly their father died in 2015, but Houssam continues in his footsteps and is a fantastic player already. He has the same solid, powerful playing style as his father. I love playing with them: though it’s a technical challenge to make my machines keep up, it’s been something that continuously taught me things and opened doors in terms of understanding music.

The ‘3 Live Takes EP’ we just released came about from one evening’s recording in my studio the day before a London show we did together for the Barbican. I would love to do more, but sadly the terrible right-wing government we have at the moment stands in the way: the Guinias were refused visas to play at an arts festival in the north of the country earlier this year, so if we want to meet to record I’ll have to go to them..

you can’t tell what the universe will bring you to

Besides the Guinia collaboration, what do you have planned next? Shall we expect a new Animal Spirits release or something completely new instead?

So in January we (Border Community) are releasing my soundtrack of a documentary film by Chris Kelly called ‘A Cambodian Spring’. It’s an amazing film, delicately telling a huge story, which kind of led me towards bits of music I might not have written otherwise. I’ve done a couple of other collaborations too, but I’m not sure when they’ll come out. And I shouldn’t jinx what I’m working on now by talking about it…

Can you name an artist from the African content that you could see yourself collaboration with in the future? (and why?)

No, because you can’t tell what the universe will bring you to. These things are best if they happen in some kind of natural way.

What would you say was the main catalyst for your move away from what’s known as trance electronic music?

I think what I do now is trance electronic music, but the world of dance music thinks that means something else! I think I’d done all I could in that environment, and when doors opened I realized I had to go have new adventures. That’s all really, life is short…

You recently composed the score for the documentary A Cambodian Spring. Is film scoring an area you would like to explore further? Any particular directors you’d like to work with?

Yeah I loved doing it, I’d love to do more, it’s really liberating and inspiring composing to picture. My dream would be to do a score for Yorgos Lanthimos, as I absolutely love his films (and one of them sort of helped me understand my life slightly), but it’s up to the universe whether that happens (and to be honest it doesn’t look likely!) Coming back to your current tour, does traveling in general inspire your music in any way?

I don’t really know, I’m sorry I never have an answer for these ‘inspiration’ questions! I think where you find music, it was there before you discovered it, it’d be arrogant to say you really wrote it. Like math. So mostly inspiration comes from exploring music, seeing what different notes sound like together.

that’s what presses the buttons in our brains

One of your side projects is the Border Community label. How do you see its role evolving in the current music industry landscape and context?

Border Community has had to evolve a bit – when we started it made sense to release 12’’ techno records. Now, that wouldn’t make any sense, but it’s started to grow into its new role – we have a whole load of things coming in 2019, music from the same world as me.

There’s a bit in a Brian Eno book about future music, where he imagines it being some kind of multifractal jazz in ten keys at once. I think this is silly – our tech has evolved so we get the illusion of progress but people aren’t evolving much, and we still really like the things we really like – repeats, patterns, simple harmony, medium-complicated harmony, that sort of thing, because that’s what presses the buttons in our brains.

Can you share with us the best record you have discovered over the last year? What made it special?

I got excited about a lot of things – the back catalog of Richard Youngs really tickled me after I found one of his things by chance, and Caterina Barbieri’s trance records made me feel like a kid, wide eyed with wonder at the beauty of an arpeggio. But the best one I didn’t discover, I watched a part of it come together in my studio – Szun Waves’ New Hymn To Freedom is 100% my record of the year. It’s such a powerful, beautiful, unquantifiable thing. It represents seeing my good friend (Luke Abbott) achieve what I thought he could achieve, reach his own personal kind of greatness. That makes me happy.

Don’t forget to tune back in to stream the songs that have shaped the James Holden sound!