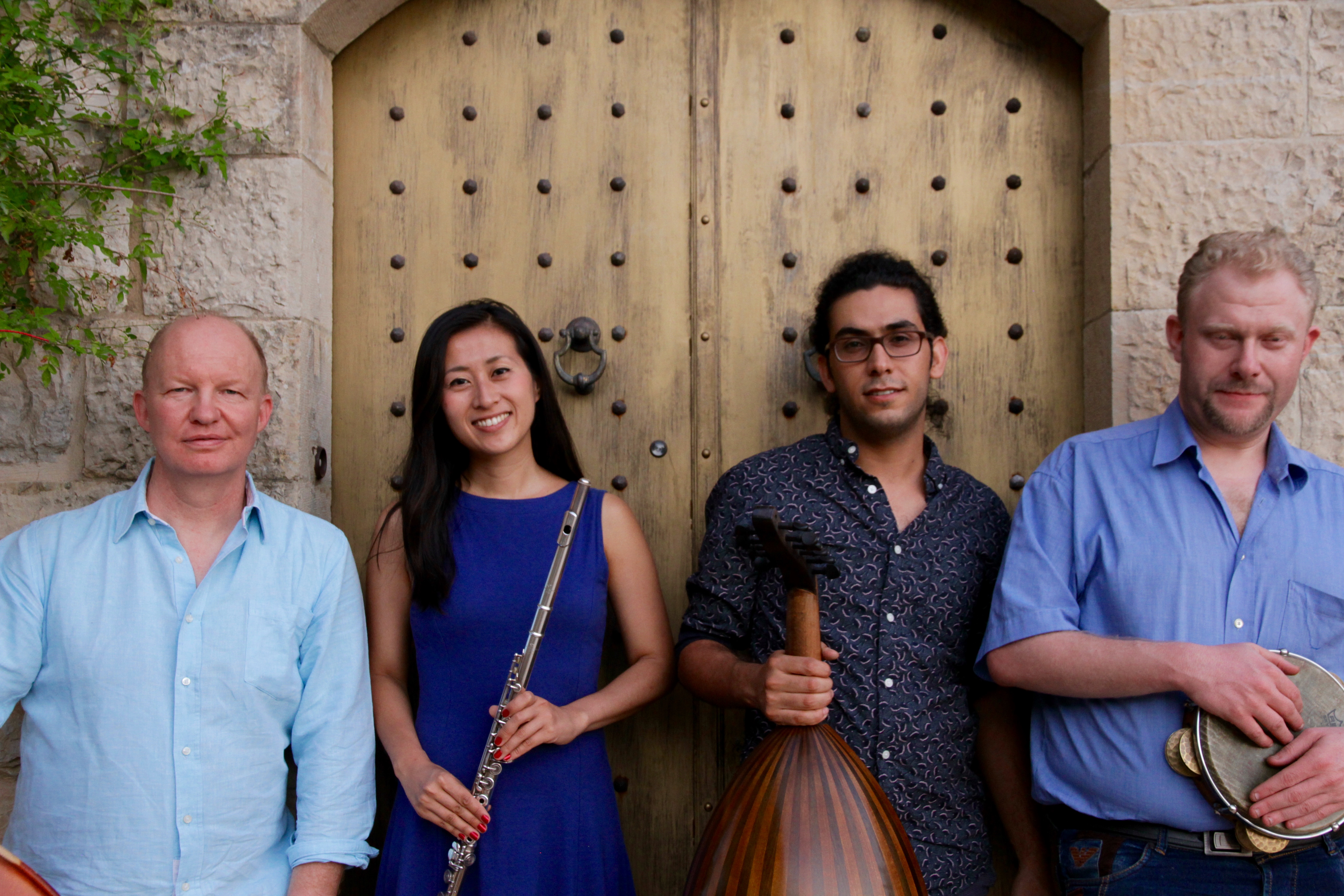 First of all, how did four people from vastly differing cultural background come together to form one coherent ensemble? And how does such multiculturalism reflect in your music?

The core group started in summer 2014. When Syrian Oud Player Mohannad Nasser and Japanese flutist Nobuko Miyazaki were both visiting Beirut. They met through a mutual friend, April Centrone, who was also the first drummer/percussionist of the group.

From the first instance, therewas an inspiring spark of musicianship among us.Despite coming from different cultural backgrounds, we had many things in common such as their emotive style of performing, rigorous training, and a serious yet open approach towards music. So we knew that we were creating something special and unique.

After her 3-week stay in Beirut, Nobuko left again for New York and Mohannadwent back to Syria to complete his studies at the Higher Institute of Music in Damascus. They attempted rehearsing through Skype, but everything was against them, including bad Internet connection, electricity cuts, time difference, and the situation in Syria. So the OUMI Ensemble went dormant for a while.

Upon finishing his studies, Mohannad relocated to Beirut. When Nobuko returned to Beirut in the winter of 2015, it was clear for both of them that they needed to give this project a fresh start.This time Syrian percussionist Rami Al-Jundi, a long-time friend of Mohannad and an excellent percussionist, joined the group. The rhythm section was completed with Ruedi Felder, a Swiss bass player residing in Beirut.

We all bring our original compositions that reflect our cultural and musical journeys to the ensemble. With our blend of expertise and experiences, we have already managed to have quite a unique sound. We are constantly searching for waysto further develop our own style with authenticity: finding commonality between the traditions and developing new ways to transcend the traditions at the same time.

I recently read that the word ‘oumi’ is Japanese for ‘ocean’. Why did you choose this particular word to be the name of your ensemble?

Technically, it’s ‘umi’that means ocean in Japanese but yes, we derived the name from this word. Our first rehearsal was in Amchit. We played well into the night by the calm sea and naturally came up with this name. It reflects our vision for the ensemble, of going beyond borders through our musical journey together.

We also like that it loosely echoes Arabic words such as ‘Oummi (mother)’ and ‘Umi (get up)’.

The OUMI Ensemble is currently based in Beirut although none of its members are Lebanese. What made you choose this particular city and does it influence your music in any way?

Perhaps the city chose us. Given the current situation in Syria, Mohannad and Rami had to make the choice to live in Lebanon. Ruedi is a long-time resident of Beirut, and Nobuko chose Beirut for its vibrant sense of community and the musical possibilities it entails.

The city influences us in the fact that its audience is very receptive, supportive, and open to new music. Also, there is a certain sense of impermanence, which makes us appreciate this current moment even more. We try to make the best of our time together.

What are the key milestones in your musical journey? And how did your individual stories connect to initiate one harmonious voyage?

Lebanon has been very giving to our journey so far. At every concert we play, there is someone who connects us to the next opportunity.

The OUMI Ensemble as it stands now only kicked off in February 2016. Since then, a lot of positive events happened. We played throughout Lebanon, including in Bekaa, the Shouf, and Tripoli, and will soon take it toJounieh. One of the group’s projects is to do a tour in Lebanon and play in small villages where hardly any cultural events are happening.

We experimented with Sufi music during a concert in cooperation with a dancer and a guest singer. Other projects are in the pipeline and we are always open to new ideas and collaborations.

How would you define your style of music? And in what way do you manage to blend Eastern and Western musical influences into your sound?

The OUMI Ensemble has a very strong focus on original music. Our compositions reflect our distinct cultures and musical journeys. Once a new piece comes to the group, it’s open to discussion and together we attempt to arrange it in the best way possible. We also play original arrangements of traditional pieces from the Middle East, Japan, and Switzerland.

Improvisation is an essential part of your work as a musical ensemble. How do you usually go about the collective improvisation process? And what does it add to you/your music?

This is an interesting question.

Every musical tradition has its own processes for improvisation. Mohannad and Rami come from the Syrian musical training. Nobuko studied classical music, Japanese folk music, and some Arabic music. Ruedi comes from the world of jazz and free improvisation. We are also influenced by all kinds of music and ideas. So each of us brings a different approach to improvisation. Depending on the composition, we take on a different approach to it. For example, Nobuko wrote a piece that uses Japanese flute but in which free improvisation works well. When we play a traditional piece such as ‘Zikrayati’, we take a more Oriental approach although we add our touch to it. We always try to make our improvisation fit the character of the piece and give it quite a bit of thought and practice.

Can you single out one particularly compelling anecdote from your journey that had an unforgettable impact on your career?

In February 2016, we played our first concert together as the 4 of us at the InstitutFrançais. It was at this moment that we realized that ‘Okay, OUMI Ensemble is back’.Since then, we haven’t stopped.

We are also really excited and honored that we recently received grants from Focus Liban, AFAC, and Al Mawred Al Thaqafy to produce our first album! We are certain that this will take the ensemble to further heights.

How can music be used as a vehicle for tolerance, acceptance and ultimately peace in today’s increasingly conflicted world?

Through our musical approach, we are expressing tolerance and openness to things that are new or unfamiliar to us. Our unique voice translates into blending and meshing cultures together with such openness. Hopefully it shows in our music that when cultures meet, communicate, and understand, something beautiful emerges that strengthens us as a human community.

As two members of the group are from Syria, the question of war and politics is always in discussion. But we do not convey a particular political message. We engage in peacemaking through teaching and playing for disadvantaged children or playing fundraising concerts for a civil society organization we believe in whenever possible. We played fundraising concerts for a few NGOs working with children, such as Yalla for Children and SEED in Tripoli. We also enjoyplaying in Onomatopoeia, which is a music hub engaged in providing music scholarships for children.

Tell us more about your upcoming plans. What has the OUMI Ensemble got in store for us in the next few months?

We will play in Jounieh on Saturday, March 25th at the Stark Creative Space.

And we are currently preparing for a yoga/dance performance on May 11th at Masrah Al-Madinain collaboration with Shiva-Lila Yoga Space. It’s an interesting project exploring emotions. Mohannad and Nobuko composed the music, and we will be collaborating with Indian musicians, dancers, and yogis.

Watch out for news on the album release and concerts!

To follow the latest updates from OUMI Ensemble, keep an eye on their Facebook page and an ear on their SoundCloud profile.