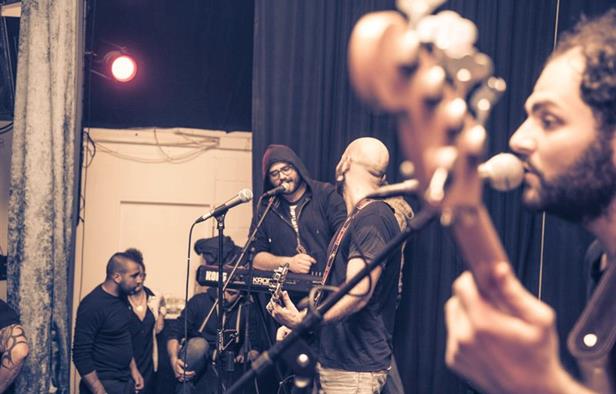 BernieMarch 3, 2014
From small local band to sharing a giant billboard with Mashrou’ Leila in the core of Downtown Beirut, Who Killed Bruce Lee have given the Lebanese community every reason to fall head over heels for the tunes. Being the attention seeker that it is, Revolver refuses to settle with the musical aspect of the band. Instead of explicitly discussing the dance-rock funky tunes of WKBL, revolving around a mostly indie foundation, *wink*, this one-on-one with the band will show you these musicians as you’ve never seen them before.
Ladies and gentlemen, the humor, the charm and the professionalism behind Who Killed Bruce Lee.

By Ziyad Nassif and the Magnificent Bastards.

We did some research and found out that you don’t really like having interviews, should we feel special?

Ha! It appears you’ve done your homework! Back then we were pretty sure “two things we don’t enjoy are: posing for photos and answering interviews (especially the ones that are irrelevant to our music), but we’re working on that”. After all Revolver, you should feel special only after you’ve felt Hess’ biceps.

WKBL have skyrocketed over the past two years to this immense popularity. What do you think differentiated you from the average local band (aside from the great music of course)

When we look at what we’ve done so far we’re conscious about how little it is, and how far we still need to go. We have a feeling that all has been blown up a bit prematurely. Or maybe it is only our minds interpreting the events that way, and in fact we’ve done something great. The thing is we will never know unless we play Carnegie hall 😉

Sticking to the question, we think that the amazing bond that exists between the four members of WKBL is what brings forth this chemistry that shows both in our act and in our music. We were never serious about the music as much as we’re serious about each other. It’s a bliss that we’ve found this energy between each other; it’s cozier than home and more lustful than sex, and people can feel it.

Your recent concert with Mashrou’ Leila was one of the biggest concerts of 2013 in Lebanon. Did you expect such great Lebanese endorsement and what did you learn from the experience?

The Soundclash was a great initiative from RedBull, initiating a music battle between bands with such different styles and energy, and we like to think it initiated a wave that will keep on growing for the couple of years to come. The potential always existed in the pool of talent we have here, but the difference today is that the promoters have woken up to that potential and would like to commercialize it. So it’s a win-win situation for all. We hope the complicity between bands and their collaboration will push it even further, as we had a blast with Mashrou’ Leila. Remember this day because this wave will only get bigger and brighter.

How did the band come together and how did you set the common grounds of your different influences to set the wave WKBL is riding on today?

The four of us are big on self-criticism, and we knew from the start that we needed to do things differently if we were to go into original song writing. Obviously it was being done before, but wasn’t taking its correct potential or place. The thing we are good at is listening, then referencing, then listening again and researching the fuck out of the music we consume. Only then we felt ready to start writing and building content. What’s still true today and in the future: if we lose our thirst for good new music, we will lose our edge.

What is the dynamic between the band members? Do you rely on jamming more or do you bring already written songs to the table?

It’s a mix of both actually. But primarily, there is always some voice note that someone was recording on a random night. We come in and we listen to it, then everyone of us does what he loves to do and we start the collaborative writing process. At many points during writing a song, we reference something we love and try to break it down in order to learn from the greats. Sometimes a song turns out great, and some other times, we just throw it into the gutter, and that is something you should be willing to do with no remorse.

Always wanted to ask: “If you could give one piece of advice to a large group of people, what would it be?”

Don’t listen to them.

What do you do when Jade plays Pool Party in his parties? Do you have some kind of ritual?

We usually get up on stage with him and give him very small but luscious kisses on his adorable yet manly and rugged silver set of hair.

How do you see the future of the local scene?

We think that Chuck Norris killed Bruce Lee, does that affect the future of the band?

Why did you utter his name? It’s all downhill from here for you Revolver.

All bands have really embarrassing stories that happen while gigging and recording, can you share a classic WKBL moment with our readers?

Ow, do you mean like that story when we went all the way to a neighboring country to play a gig that was not promoted, by a company that got us bad booze and some other incriminating things, then got fired from the hotel, completely blacked out, when we played a prank on the reception by hiding in the closet and calling them to come up and fix our TV? Mmmm.. and then missing our plane back home and not being able to book anything else for the next week?? that kind of story?