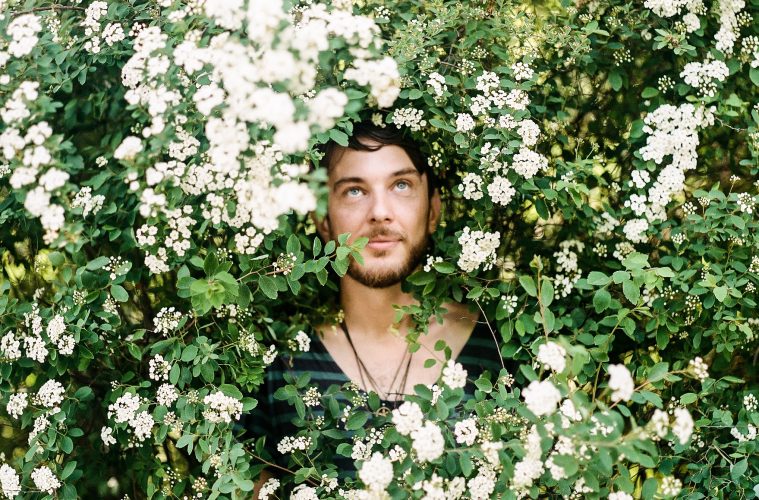 Powel is an electronic music producer from Berlin, Germany. His sound is very distinctive and dreamy, complementing his association with All Day I Dream and countless other labels.

If you’re in Beirut, make sure to catch him at Frozen Cherry this Sunday for a crossover between the Living Room Sessions and Sag & Tre. “I’m broke and it’s not even the 15th of the month” is not an excuse because this is a free event so get ready for a road trip leading to fun times and good music. Event details here.

In the meantime, here’s our little interview with Powel. We spoke about the important things in life, like how he makes music, bananas, labels and much more. Read below for the juicy details. You haven’t really done any interviews and it seems that you like working more offline than online. What’s the story? Who is Powel?

Apparently, someone who is not really keen on spreading my life out in public. I think a lot of this comes from my own perception of DJs and producers when I was younger. When I was getting into the scene, a DJ was just someone who plays music and gets judged based on how good he/she is doing it, and not someone who presents his/her whole life on social media – which to be fair didn’t really exist back then.
Same goes for producers. I never really did read any interviews of producers I like. I mean the worst case scenario would be that you realize that your favourite musician is an idiot. What do you do with that information? Do you stop listening to their music or do you try to separate the person from their work?
Social media nowadays is a tool you kinda have to work with, yet it is still uncomfortable for me most of the time.
So in the end, I think, you just have to handle all this in the most honest way possible. If you’re an extroverted person – lucky you. It’s definitely good for your career; but if you’re not, you shouldn’t pretend to be. There’s no reason to do so.

How do you manage to find the balance between creating an enchanting soundscape that takes the listener in, but keep a solid foundation of a beat that keeps on grooving?

Well, the answer lies in your question. You can write the saddest piece of music, but when you add a beat to it, people will dance. I find this really fascinating, and I have no real answer to why it works that way. Probably because humanity is dancing to a monotonous beat since its existence, and it lies deep in our DNA to consider a beat as something joyful.
I mean, just take the area of electronic music where I feel at home. If you would take away the beat from most of those tracks, they could also work in a movie, in a scene where people get their heart broken or for a very dramatic death scene. But combine that with a beat, and all of a sudden it’s all dreamy and dancy. I like having that duality of happiness and sadness in music.

The sounds you use in your tracks are very unique and sound very organic and lush. How do you go around sampling sounds and choosing the gear for your studio sessions?

It’s very random. I always have my little field recorder with me. I sometimes go to flea markets and buy random old records and see at home if there’s some good sample material on them. And as far as gear goes, I’m more interested in very old gear, which unfortunately is very expensive. There’s been some very interesting development in the modular world, sound wise. But when it comes to modern synthesizers, I haven’t yet heard anything that piqued my interest. Also, if I were to give a piece of advice to new talents, it would be: stay as far away as possible from sample packs and presets. If you record, for example, some random kitchen noises with your shitty laptop mic, it’ll sound a million times better in the end then anything you can get out of a sample pack.

Your DJ sets are filled with rare gems from so many different styles and worlds but somehow they have a ‘Powel’ soul to them. What is the criteria you have in mind when you’re crate digging? Or is it a heart thing?

It’s definitely a heart thing. I usually decide within a couple of seconds if I want to buy a track or not. I just skip to the middle part and see if I like the general sound design, the groove, and the chords. It usually works. But I’ve learned that sometimes I should check the tracks for “bad” surprises.
This happened quite a few times at the beginning: I bought new music right before a gig, which sounded fine after just a short listen, but when I played them out they turned out to have some cheesy vocals (I really don’t like 90% of the vocal tracks out there), or some tracks from which I thought were quite chill, turned out be very heavy after the break. And then you’re standing there, playing music you don’t really like. Can be pretty funny though.

You have releases on Sag & Tre’s “Blossoming Gardens” and “Freshly Picked, Vol.1”. Can you tell us about your relationship with the label? How did it all start?

I actually don’t remember how the label got on my radar, I just remember that I was an instant fan. Especially since it came with a bunch of new incredibly talented artists I had never heard before. So I didn’t have to think twice when I was asked to do the remix.

You’re playing at Frozen Cherry in Lebanon as part of the Sag & Tre showcase. What are your expectations?

Hanging out with friends and friends-to-be, and enjoying an amazing panorama and
some good music.

Speaking of cherries, what’s one fruit you could eat every day for the rest of your life?

Probably bananas, but I’m not sure. Grapes could also be a good candidate for that. I just read the question and thought: I hope we have bananas in the kitchen.

What would you say is more challenging and why: putting a track together in the studio or playing new material in front of a crowd for the first time?

Definitely the studio work. It can be very frustrating at times and even when the creative work is done, you still have to go through the whole process of mixing and EQing, etc, which can be hell for me and actually can make me really hate my work when I finally have it ready to be released.
Playing them out, on the other hand, especially in that short period of time when nobody knows it’s mine,  is fun. You’ve worked with many labels, including All Day I Dream, Common Labour, Seven Villas and Sol Selectas, to name a few. How do you decide which tracks to release on which label? Would you consider signing with just one and giving up on the others?

The way I see it is that ADID is my home base because all the people involved are just incredibly good people, and it reflects the core of my sound perfectly. But every now and then I try to break out just a tiny bit sound-wise, so I work with other labels.

The way it usually works is: I get a request asking if I want to release something, and my answer is: Yeah, but it’s not gonna be ADID sound. Then I just send some of these ideas over to them and it has worked out quite well for me in the past. I find it also very interesting to release on new labels, as I did with Do Not Sit On The Furniture or Das Sind Wir. You kind of get a blank canvas that you can fill with everything you want because people don’t already have a specific sound in mind when they think of the label. I mean, you shouldn’t consider what people think in the first place, but yet it’s still somehow freeing.

Hmm, I don’t think I have a particular song I’ve always wanted to remix.
I would like to work on some music with Sigur Ros or Max Richter though. Well, I’m not sure if I actually want that because I would just end up fanboying over them instead of making music.

As for me getting remixed, I think I would like to see what someone would do with my stuff; someone who’s not necessarily part of my scene, maybe a remix from Dntel, Prefuse 73, The Books or, of course, Boards Of Canada could be very interesting.