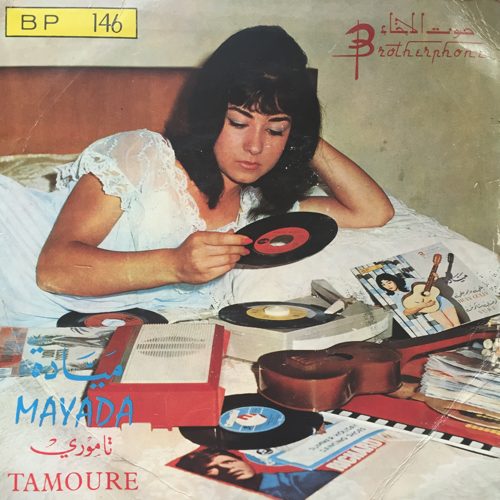 Yes, I remember her, she was quite sexy”. I knew I had stumbled upon a hidden gem  when I heard my father’s response to my question about Mayada. In front of my mother.

Mayada, a singer of Circassian origin, was known for her “franco-libanais” style. In the current Arabic pop landscape – think Haifa, Myriam Klink – Mayada’s artistic style would be considered quite conservative. In the 1960s however, as San Francisco was blooming and London was swinging, Lebanon’s most popular music remained fairly traditional. The Rahbani Brothers and Fairuz were conquering the region. Umm Kulthum and Abdel Wahab had become household names. Rock n roll’s reach in Beirut was rather limited, despite a vibrant alternative scene. Mayada’s music infused a bit of that flavor in the mainstream.

Her music and style draw directly from twist and rockabilly, genres that had already conquered three continents at that time. She was not the only one to get inspired by rock n roll and western pop. Randa, Jacqueline, even Sabah – in her pop days – and other “divas” of that period sometimes meshed it with oriental sounds. Mayada however seems to have been the most “western” among her contemporaries, and her performances are a refreshing mix of rock n roll with arabic lyrics.

In order to understand what Mayada was about and why she was different, we curated here some old videos of her. As you will see, she could be sweet like Francoise Hardy, and sexy like Brigitte Bardot, enigmatic  like Nico, and authentic like France Gall.

(Please note that there’s barely any information of her on the Internet, don’t hesitate to comment or send me any fact/correction/addition)

Start with the most outrageous one, “Sheft el Otta“, or “I saw the cat” (part of a two song video). The melody sounds like a cover, but I haven’t been able to trace the original. The lyrics suggest it could be a children song, but I think these were broadcasted way past bedtime. The best part of the performance though are her dance moves, which makes the entire performance really endearing and kind of mesmerizing.

The second song in that same video is an arabic cover of Yellow River, a Christie/Tremeloes hit from 1970. This means that this video dates from the early 70s.

The next video is my personal favorite: a rendition of “El Tango el Balady” (“Country Tango”). She looks younger here, which means it could have been filmed sometime in the early 60s. She’s a bit stiff, almost shy in her movements, though at the same time playful and beaming. Watch the whole thing, it keeps getting better.

This song mixes  English and Arabic, with some Italian and French. Titled “Yeah Yeah Yeah”, it shows Mayada doing some serious Twist, to the sound of a killer saxophone solo.

The next video seems to have been made around the same time. “Nar Nar Nar” (“Fire Fire Fire”) is possibly a loose interpretation of Chan Romero’s swinging Hippy Hippy Shake, released in 1959. Mayada in that same mood, shaking without a care in the world.

Another performance from Mayada’s younger years. This song is called “Hek Hek“. The tune has 1920s written all over it.

This clip taken from a series called Sah el Nom shows Mayada performing “Kan Kan Ya Ma Kan” (“Once Upon a Time”). Despite the comical setting, one can hear slightly dimmer tone, with production taken straight out of the Phil Spector book.

It’s worth watching her other performance of that song, extracted from Tele Liban, although the audio quality is not very good.

Before Thalia and the Mexican soap opera hairdo, there was Mayada. The melody of “Olala” (Jannanni bi harakatou) was composed by Egyptian musician Atiya Sharara, but it’s not clear who’s behind the French-Arabic lyrics.

The song “Aala Jesr el Damour” seems loosely based on Jingle Bells, and somehow transforms into Alouette one minute in. Mayada here is sporting a pretty amazing Hawaiian style.

Her discography has some other great songs. If you liked it so far, you should give a listen to this 5 song playlist: